I’m a hiker. I pretty much always have been, beginning as a small child being taken on hiking and camping trips by my mother (at 81 she has just begun to slow down in the past couple years). For a while, about ten years ago, I even got into climbing, but had to let that drop as the time commitment was more than I had capacity for. I still harbor dreams of ascending some of the larger local peaks from time to time, and to that end I decided that this summer I would climb Mt Adams.

I say climb, but I suppose what I really mean is scramble, as the South Spur route that I intended to take is “non-technical,” which is a polite way of saying that if you fall, there is no rope with which your companions might save you, and you may therefore tumble two-thousand feet down an ice chute all by yourself, rather than dragging the others with you. You still need crampons and ice axe, so it’s a little more than going off-trail. But I digress.

Regardless of the technicality of it all, it had been a few years since I had ascended something like that, and I wasn’t quite in the shape I thought I should be for the attempt. So, over last winter and spring I set out to train, getting much more intense at the gym, going running, outdoor stair climbing (my personal favorite is Golden Gardens — see this delightful description (with photos!) of the experience), and, as the winter turned to spring, replacing the stairs with conditioning hikes in the lower-elevation Cascade foothills.

On a side note, I’m not much of a runner, because running tends to make my knee hurt, which probably just means I’m doing it wrong and have bad shoes. So, this time I purchased new shoes and deliberately set out on a very gradual and easy program. Fat lot of good it did me, as you’ll see.

The training paid off. I received compliments on my shrinking waistline, the scale also had nice things to say, and the improvements in time going up and down those stairs was measurable, not to mention I got to the point where I could actually talk while going up those stairs, and not just huff and puff and sweat and wonder Dear God, will it ever end? Make it stop!

Then came the Cable Line. You know how trails will make switchbacks to get up steep hills, and sometimes you can see where people have cut the corners of the switchback, saving themselves perhaps a few extra steps but enduring a brief moment of steep ruggedness? (Don’t ever do that, by the way. Very bad form). Well, the Cable Line is the ultimate cutting of a switchback, in that while it starts and ends at nearly the same place as a real trail, it bypasses all the switchbacks of that trail and goes straight up, gaining 2,000′ in just 1.5 miles. This is pretty much the definition of a vertical slope, at least as far as hikers are concerned.

So, I made it to the top of the Cable Line ok. I wasn’t especially impressed with my performance, but I didn’t die on the way up. At the top one is rewarded with really quite a nice view of the Puget Sound communities laid out below, and once I had learned how to breathe normally again I was able to appreciate this.

Then it was time to go back down. That’s when my troubles began.

Downhill is where creaky knees make themselves known. I didn’t even attempt to go back down the way I had come up. I consciously tried to save my knees by taking the longer, but less steep, winding West Tiger 3 trail. That would be the one whose switchbacks the Cable Line so directly cuts. However, I was thinking about dinner and moving pretty fast and after all this wasn’t the rough and steep Cable Line but rather a normal trail, and… my knee popped.

Hobbling down the rest of the way, practically hopping on one leg, I knew this was not a good sign. Once I made it back to civilization (there was some doubt), I gave myself a week off from all things stressful to knees, then tried a city park walk, and… no go.

Climbing was out for this summer.

However, maybe not all was lost, and I’d still be able to get in some really good hikes, just not the steep, snowy, “semi-technical” high-angle bits with heavy packs. I had already made plans for some weekend getaways in late summer (after the climb was to be finished) to cabins and lodges in beautiful, mountainous parts of the state, with the intent of spending two or three days hiking classic trails in each spot. With an eye to salvaging what I could of the summer I set out to restore my knee, going to physical therapy, and so on, and it is getting better.

Just not very quickly. Walks of more than a few blocks have a tendency to bring back that “pop,” especially if there’s any downhill to it, so those classic trails have been beyond me this summer. My fitness level has returned to a pre-training state, and I’m afraid the scale is no longer as friendly as it was a few months ago.

I elected to still go on the getaways, however, even though I could not hike. “Perfect writing time!” I thought to myself. “I’ll get so much done!” And it’s true, I have managed to get in some decent writing time while hanging around the coffee shop in Glacier, and in the beautiful lodge at Paradise and picnic area at Sunrise, and, this weekend, the inn and country store at Mazama.

Alas, my summer weekend getaways are now done, but I’m certain I’ll manage to continue to find inspiration around me. My stories tend to take place mostly in the city, after all.

And next summer there will be more hiking. 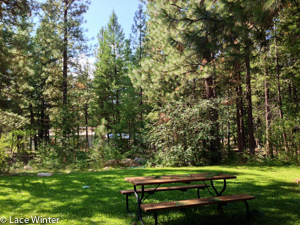 1 thought on “Benefits of a Bad Knee”